As Seen on TV: The Mysterious Career of Ross Geller on Friends

I usually receive one of three reactions from people when I tell them I study anthropology. The first is confusion, because depending on their experiences some people have not heard of anthropology or are unaware that the study of humans, their skeletons, genetics, culture, material remains, language etc. is called anthropology. The second group of people have heard of anthropology and are either neutral or excited about the discipline. The third group of people are those that get the most excited. “Oh!”, they exclaim, “What’s the latest dinosaur you’ve found!!!” This is the group of people that is the most disappointed when they learn I cannot in fact tell them about the latest in Jurassic predators and the one I get to educate about the difference between paleontology and anthropology.

At this point it’s a standing joke in my field, the mix up between paleontology and anthropology. It is true that some branches of anthropology, specifically prehistoric archaeology and paleoanthropology (human evolution), devote their study to a timescale farther back than most of us consider. We became anatomically modern as Homo sapiens about 200,000 years ago, and our ancestors and the chimp lineage diverged about 5-7 million years ago, but the velociraptor stalked its prey about 75 million years ago. So as an anthropologist, I grapple with a much shorter time frame than a paleontologist. Where then does the confusion originate? Sure both disciplines study remains of the past but I blame Ross Geller. Yes, you heard me – Dr. Ross Geller, from the television show Friends. He was a paleontologist, but in many episodes he makes references/science jokes about subjects that actually fall under the umbrella of anthropology. There are in fact numerous articles detailing the questionable knowledge of Professor Geller as a paleontologist. In this article I am going to dissect some of Ross’s scientific references on the show for their place within academia (paleontology vs anthropology) as well as their accuracy.

The One Where Australopithecus was Not Erect

In episode 15 of the second season, Ross speaks to the museum on the phone about an issue with one of the hominin displays.

To which Chandler jokes, “Well maybe he was nervous.”

This exchange is obviously for the “erect” joke because Australopithecus, the genus of our ancestors that includes the famous fossil, Lucy, was indeed bipedal, meaning they walked as we do on two legs (as opposed to a quadruped who walks on four legs). Lucy, a member of the species Australopithecus afarensis, lived in East Africa approximately 3 million years ago. Based on the structure of the pelvis and femur (thigh bone) of this species, they walked upright. However, all of the Australopithecus species had longer upper limbs, more like a great ape, so may have still spent some time climbing in the trees. This may be what Ross is referring to when he says “not fully erect”. However, even Homo habilis has upper limb proportions longer than other members of our genus Homo. Some paleoanthropologists even argue that Homo habilis is too much like Australopithecus to belong to our genus.

The One Where Ross Knows When the Dinosaurs Died 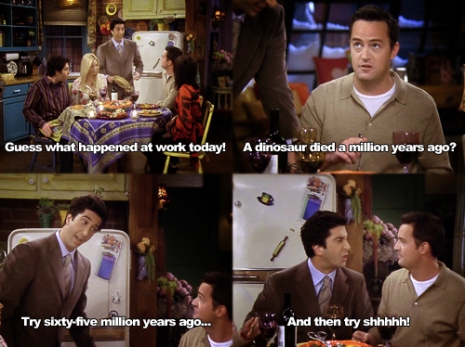 Ross correctly amends Chandler’s time scale of the dinosaurs’ extinction in episode 14 of season 10. This event is known as the KT extinction and occurred at the end of the Cretaceous Period, approximately 65 million years ago. The KT extinction, when the majority of the non-avian dinosaurs died, is only one of several mass extinction events. This is, however, incredibly basic knowledge that many would know (aside from Chandler it seems) so it does not particularly show off Ross’ expert knowledge as a paleontologist, although it does fall within that realm.

The One Where Homo habilis has a Microwave

Following the phone conversation that spawned the “erect” joke, Ross and Rachel head to the museum so Ross can fix the Homo habilis exhibit. He is upset at whoever was in charge of the display because, as he says, “Look, I can’t believe this, look… Homo habilis hasn’t even learned how to use tools yet and they’ve got him here with clay pots? Why don’t they just give him a microwave.” While there is no archaeological evidence that pottery existed 2 million years ago (the earliest evidence is from China about 19-20 thousand years ago), Homo habilis (2.4 – 1.6 million years ago) literally means “handy man” and was so named because at the time of discovery it was believed that this hominin was the first to use stone tools. The oldest stone tools, known as the Oldowan Industry, are present by at least 2.6 million years ago, though newer evidence seems to push the date back to about 3.3 million years ago, definitely before Homo habilis. This means that even some species of Australopithecus were likely stone tool users.

(Also as important as I think quality museum exhibits are, this is an issue that can be solved during normal museum hours and not by a paleontologist.)

The One Where the T.Rex was in the Correct Time Period

I’m going to throw Ross a bone here (pun very much intended) and say he displays intermediate knowledge in this scene. In season 4 episode 11, Ross secures Joey a job as a tour guide at the museum and while Joey demonstrates for Rachel and Chandler he relays incorrect information about the T. rex.  If you were not overly interested in dinosaurs or did not take a courses in biology or geology you may not realize that Tyrannosaurus rex did not live during the Jurassic Period as Jurassic Park suggests. This tyrant lizard actually lived during the Late Cretaceous, some 66-68 million years ago. The Velociraptor is another dinosaur that also lived during the Late Cretaceous (75-71 million years ago) despite popular association with the Jurassic.

The One Where Ross is Obsessed with the Leakeys

Knowledge Level: Indeterminate to Not Applicable

Ross actually mentions one or more of the Leakeys in a couple different episodes of the series. In this episode from season 1, the gang is talking about Chandler’s newest romantic interest and how she is polyamorous, with a husband, a boyfriend, and a Chandler. The Leakey family, however, are basically considered royalty within anthropology, at least paleoanthropology. Ross even says in this scene, “Well y’know, monogamy can be a tricky concept, I mean anthropologically speaking…” So Ross is at least aware he is speaking about a concept in anthropology. To my knowledge, however, Richard Leakey, as a paleoanthropology and conservationist, does not have a particular theory about monogamy. He has commented on Owen Lovejoy’s theory that the earliest humans were monogamous but to my knowledge he has not proposed a full fledged theory on the subject.

In episode 22 of season 10, Ross again references one of the Leakeys (he does not give a first name and many of the Leakeys were/are involved in paleoanthropology). He is speaking to the head of his department, presumably the head of the Paleontology Department, about dates published by the Leakeys. But the Leakeys, as paleoanthropologists, would be contributing dates to the discussion of early hominin or early Homo timing, dates in the range of 1.5-3 million years ago – dates that are far too young for paleontologists to be concerned with.  As far as I know, none of the Leakeys have speculated on dates concerning anything related to dinosaurs, since that is, you know, not their subject area.

The One with the Swimming Dinosaurs

Knowledge Level: So close yet so far

In episode 12 of season 8 Ross is assigned a new graduate class that is located all the way across campus. At the end of the episode we see him successfully make it to the class on time by rollerskating there – scientists are nothing if not problem solvers. He is teaching the class about Hadrosaurids, members of the family Hadrosauridae, bipedal, duck billed dinosaurs. Everything written on the board behind him is mostly true of the Hadrosaurus, a genus of the hadrosaurids that is indeed a 30 ft long herbivore. According to early descriptions this was a dinosaur that lived an amphibious lifestyle and subsisted on soft water plants. A reexamination of the teeth and vertebral anatomy, however, concluded that this was probably not the case and that swimming was unlikely. There is new evidence (post Friends) that some carnivorous dinosaurs were swimming.

This lecture is actually going really well for Ross…until he opens his mouth. “Now”, he says, “the hadrosaurids have been unearthed in two main locations.” At this this point he wheels over to a map on the wall and points to somewhere in the Middle East (Saudi Arabia maybe) and China. However, fossils of the Hadrosaurids have been discovered in Asia, Europe, South America, North America and even Antarctica. At first I wondered if perhaps new fossils had been discovered since season 8 of Friends but this information goes back at least to 2000, so there’s really no excuse.

The One with All the Sediment 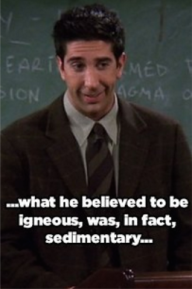 There are multiple episodes in which Ross eludes to his expertise concerning sediment. While related to both paleontology and even archaeology, since it has bearing on fossilization and the deposits in which archaeologists and paleontologists dig, the study of sediment is, academically, within the discipline of geology.

The One Where Ross Finds the Dinosaur DNA

Discipline: Paleontology sprinkled with Anthropology, possibly a dash of Geology

In episode 22 of season 9, Ross attends a paleontology conference where he is the keynote speaker. It is a little unclear what the topic of his speech is since he references the shortcomings of carbon dating, the Mesozoic Era, the break up of Pangea, multiple dinosaur genera (groups), Homo erectus, and the Triassic Period. All of these are valid subjects though carbon dating and Homo erectus are subjects for anthropology. Toward the beginning of his speech he states, “Then we have to await the data from recent MRI scans and DNA testing which call into question years of simple carbon dating.” Assuming that Ross’s topic is indeed dinosaurs of the Mesozoic Era (the time period that includes the Triassic, Jurassic, and Cretaceous during which the dinosaurs lived) he has apparently found a way to extract DNA and carbon from fossils. Both procedures are impossible given that fossils are no longer bone – they do not have any DNA or carbon left to test. Additionally, due to the half life of carbon, the dating method that uses radio carbon has an upper limit of about 50,000 years. Any farther back and there is not enough carbon to reliably measure so other dating methods have to be used. And DNA has been extracted from Neanderthal remains dated to about 200,000 years ago but the oldest sequenced DNA is from a 700,000 year old horse. He ends his speech with “…in a very real way we can bring the Mesozoic era into the 21st century”. Ross apparently lives in a world where Jurassic Park is less of a cautionary tale and more of an instruction manual.

In researching for this article (aka binge watching Friends) I can tell you that Ross is, at best, a questionable paleontologist. He does, however, become a tenured professor at a really really young age so he must be doing something right – we just don’t see it. He also frequently references anthropological concepts and more often than not, is wrong about them. And then there’s this:

No. Just no. I will give you Jurassic Park – there are actually dinosaurs in that movie. But for the love of all that is anthropology, leave Indiana Jones with us.