A Pirate’s Life for Me: The Bioarchaeology of Scurvy

In the romanticized imagery of a swash-buckling rogue who plunders and pillages his way through an anti-hero story arc, pirates have time and time again captured the public’s imagination. This summer marks 15 years since Pirates of the Caribbean first appeared as a major motion picture, adapted by Disney from its popular water ride that first appeared in the late 1960s. While the continued popularity of this franchise, which has now grossed over 4.5 billon dollars in total, demonstrates our continued fascination with these sea faring scoundrels, pirates for popular consumption is hardly a new concept. Robert Louis Stevenson’s Treasure Island was first published as a book in 1883 and has enjoyed success in countless adaptations since. Captain Hook, the notorious villain of Neverland, first appeared in J.M. Barrie’s 1904 play, Peter Pan; or the Boy Who Wouldn’t Grow Up. 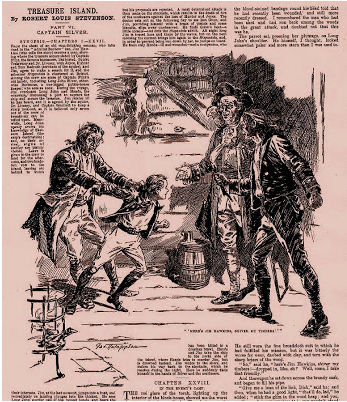 The archetype of the pirate popularized by these books and movies originated from the Golden Age of Piracy from the mid 17th to 18th century. This period is characterized by several bouts of intense piracy, likely due to these buccaneers taking advantage of the increased number of goods being shipped from Europe to overseas colonies when government control and oversight was low. Edward Teach, infamously known as Blackbeard – one of the most well known pirates of the English speaking world, was one such pirate active during the post-Spanish Succession period of the Golden Age.  He joined a crew in 1716 and after his mentor retired in 1717 he stole a ship of his own, a French merchant vessel that he dubbed Queen Anne’s Revenge. His nickname he earned from his thick black beard and intimidating appearance – he is reported to have dressed in all black and tied lit fuses under his hat. One of his more notable acts was forming an alliance of pirates to blockade Charles Town, South Carolina and ransoming its inhabitants. Blackbeard and several of his crew were killed on 22 November 1718 by Robert Maynard, a lieutenant of the Royal Navy. Blackbeard is one of five real life pirates to appear in Treasure Island and the legend of both his image and manner endure in the reimagined stories of pirates today.

Whatever the seemingly glorious adventures of Captain Jack Sparrow and Will Turner, however, these stories are heavy on gunfire but gloss over other very real health concerns that a life running from the British Royal Navy would entail, including the less blockbuster worthy disease of scurvy. Scurvy is the name given to the range of disease processes that result from a deficiency in vitamin C. While other mammals synthesize their own, humans, other primates, guinea pigs, and one fruit eating bat must obtain this vitamin from dietary sources. Fresh fruit and vegetables are obviously an excellent source but certain animal products do contain enough vitamin C to prevent a deficiency, including cow’s milk. Vitamin C has a role in a number of important biological pathways in the body, including the maintenance of adequate immune function. Scurvy is characterized by weakness, especially of the limbs, and fatigue. Without treatment, gum disease, bleeding from the skin, and even poor wound healing can also occur. All such symptoms that would surely put a damper on any plundering one planned to do.

Knowledge of scurvy, and some conjecture on how to prevent its unfortunate consequences, dates back at least to ancient Egypt, with reference to the condition in 1550 BC. There is even a mention of it in the Old Testament. In the first century A.D., Pliny the Elder proposed various plants that may be used for a cure.  However, it wasn’t until 1747 when a Scottish surgeon named James Lind conducted clinical trials to demonstrate that lemon and lime juice actually prevents scurvy. The subsequent stocking of lime juice on English vessels is where the term “British limey” originated. This clinical trial was conducted post Golden Age of Piracy and even if anecdotal evidence on how to avoid or prevent scurvy was known to pirates, long voyages without access to scurvy preventing foods was the reality.

Scurvy may start with swelling of the gums, tooth loss, and weak limbs but as it weakens the structure of blood vessels, hemorrhaging can occur at different locations within the body. For the brain, seizures and aneurysms could happen at any moment; even hallucinations were possible if the lack of vitamin C causes enough oxidative stress to alter the effectiveness of neurotransmitters like dopamine and serotonin (another function of vitamin C is to pick up free radicals). Obviously when bioarchaeologists examine past populations for scurvy though, none of the soft tissue remains. In the skeleton, hemorrhaging can severely affect new bone formation. How then, does the skull and crossbones look when afflicted with scurvy?

Over the past 10 years in particular, bioarchaeologists have worked to develop more comprehensive criteria for the identification of scurvy in both juveniles and adults. Due to the fact that multiple conditions may manifest similarly in the skeleton, scurvy is identified as a possible diagnosis when an individual presents with certain macroscopic features (for a broader explanation of differential diagnosis in paleopathology, see my previous post on The Archaeology of Fermentation). As seen in the figure above, increased porosity of several bones in the skull is often sited as a key feature of infantile scurvy. Porosity or new bone formation may also be present in the pelvis and long bones. In adults, macroscopic alterations due to scurvy may be more subtle since bone is no longer actively growing. While new bone formation may be seen in the eye orbits and long bones of adults with scurvy, many adults with this condition will not display clear diagnostic changes in the skeleton. X-rays may also be utilized for additional observations to assist in the confirmation of scurvy as a possible diagnosis, especially in juveniles.

Scurvy is often referred to as the “disease of discovery” and the disease claimed nearly 2 million seamen from the 15th to the 18th century. Though while tales of scurvy at sea have caught public attention, it is important to remember that it is a disease that would have been much more widespread in the past among the general populous, since seasonality and food shortages affected access to vitamin C rich foods more so than they do today in developed countries. The child in the figure above, for example, was an individual found in a mass grave from mid 19th century Ireland, the height of the Potato Famine. It is also important to keep in mind that despite lack of scholarship on scurvy in the modern age, this is not a disease that was left in the Golden Age. Especially with the realities of food shortages from climate change or political strife, it is likely that scurvy is much more prevalent in the modern world, particularly in developing countries, than we realize. Identifying the existence of scurvy, past and present, can help illuminate the health consequences of vitamin deficiencies, the impact of cultural practices, and provide valuable information on human and disease interaction. So depending on your diet, you may want to add a little lime to your rum.